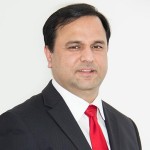 M City Is Set To Welcome Its Newest Member
It’s been only a few short years since M City staked its claim as the definitive mixed-use community of Mississauga’s future. In 2017, M City’s first building – M1 – introduced as the tallest tower in Mississauga, started an unprecedented sales campaign that garnered attention across the country and beyond. Only a mere month later, M2 was launched as its twin counterpart and immediately enjoyed the same success. In 2018, M3 was revealed. A soaring 81-storey tower that set the new benchmark as Mississauga’s tallest building, while setting new sales records and taking top prize as BILD’s ‘Project of the Year.’ With M1, M2, and M3 now well under construction, it is time to present the next chapter in this spectacular story.
This is M4.
The iconic podium is an assembly of building blocks that initiate a sense of perpetual movement. These stacked rectilinear boxes add drama to the overall composition as they appear at times to collide with architectural energy while seeming to float peacefully in cooperation. The linear silhouette, lightness of mass, and clear glass walls lend ageless modernity.
Source: M4 Brochure